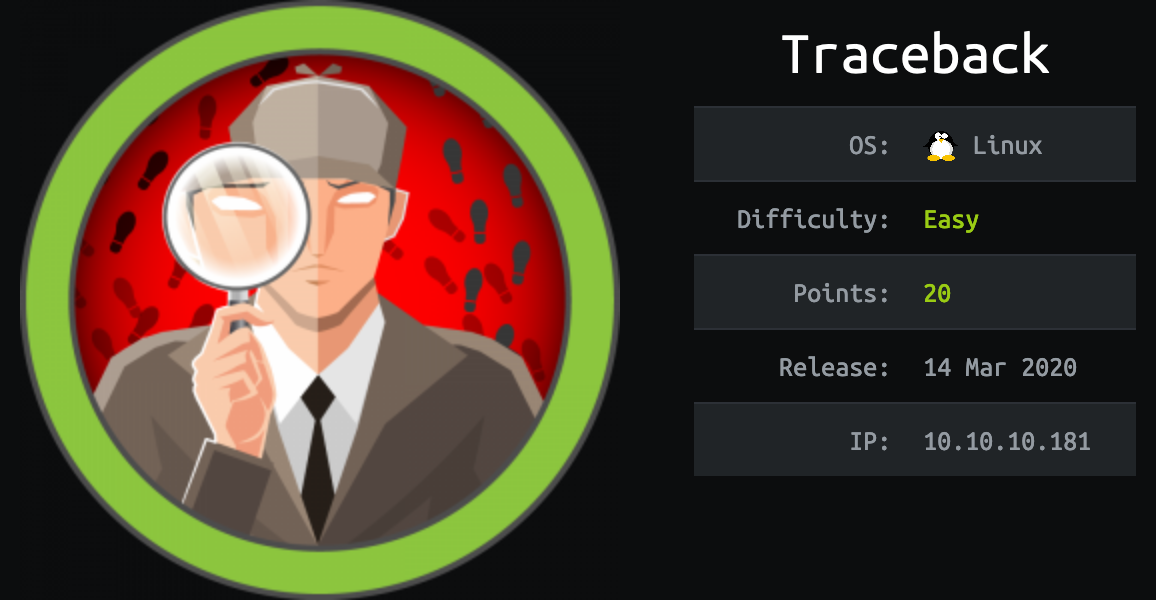 This machine was challenging, but I learned a lot. I learned how to make “smarter” shells and how to upload the pspy script to a remote server. I wonder if I could have completed this machine without adding my public ssh key, because at the moment it is very identifiable. It was a good box tho. I look forward to my next one.

As usual with a htb machine there is a website being hosted, and it looks like the machine is pwned already. If we view the page source we can see the comment <!--Some of the best web shells that you might need ;)-->, so there might be a web shell some where. I am going to do a ffuf scan on the domain. The command I used is ffuf -u http://traceback.htb/FUZZ -w /usr/share/dirb/wordlists/big.txt -e .html,.txt,.php,.xml.

That did not teach us anything new, but after googling some stuff about the author… considering that he signed the first page of the web site I found a repository that he forked called Web-Shells. So I created a wordlist with the files in that repo and after running the command ffuf -u http://traceback.htb/FUZZ -w web_shell_wordlist.txt, ffuf found the shell smevk.php, unfortunately it is locked behind a login screen.

If we take a look at the source code for this shell in the GitHub repo we can see that the default credentials are admin::admin. If we try them they work! Awesome so we got into the web shell.

In our shell we are the user webadmin, let’s navigate to this user’s home directory by using the command cd /home/webadmin. In here we see a note file that reads:

I found it by using sudo -l. It seems there is a file called /home/sysadmin/luvit that we should be able to run. After a quick google search it turns out that luvit can be used to run lua scripts.

We can get some code to spawn another shell from here. We can create the script by echoing the content of the script into a file in the /tmp directory then running the script with sudo -u sysadmin /home/sysadmin/luvit script.lua. Because when we did sudo -l we found out that we can run luvit as sysadmin without a password. Okay so here is what I did step by step:

First I navigated to the /tmp directory, then I echoed the following code into a file called script.lua.

Now let’s get root, but first I upgraded the shell again with the command python3 -c 'import pty; pty.spawn("/bin/bash")'. Okay so I added my ssh public key to the authorized_keys file because I want to be able to reconnect fast if I mess up. This probably isn’t advisable. This also allows me to scp pspy onto the machine to monitor the processes running. I notice that the files in the /etc/update-motd.d get replaced by there backups frequently. Let’s check them out. It looks like we have permission to edit these files in the update-motd.d directory. Let’s try and add some code and ssh into the sysadmin user to escalate privileges. This is a long shot, but here goes nothing.

First I started listening on my machine on port 9999 then I added the following code to the file 00-header.

Next I had to ssh into the machine quickly before my script was over written. Once I ssh back into the machine as sysadmin this reverse shell was activated on my listening port. When I type whoami, I am root.