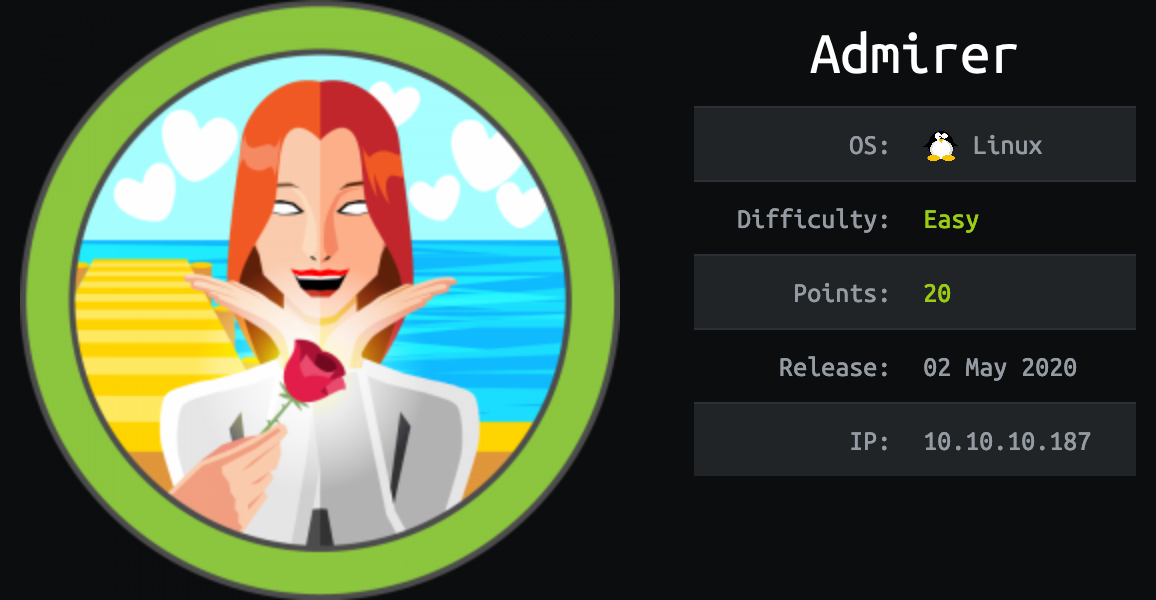 This was one of the first boxes I completed and it was difficult. It took me the longest time to enumerate the directories and finally find what I was looking for. Overall, I learned more about using my resources and double checking where I had thought I already looked. Good luck to all who want to try this box!

As usual for HTB machines there is a web server on port 80 and SSH is open. Let’s start looking around. While we are looking at the webpage I am going to run a gobuster scan in the background with the command gobuster dir -u http://$IP -w /usr/share/dirb/wordlists/common.txt.

While looking at the website I went to robots.txt and found out that there is a directory called /admin-dir. This is something we should checkout. If we try and navigate to the directory, we are not allowed to view it, that’s okay, we will get there eventually! Let’s see the output of our gobuster scan.

Looks like we didn’t find too much we didn’t already know.

I am going to run another gobuser scan and I added the argument -x .php,.txt,.html so that I can look for file extensions. Again no results, so I am going to try one more time with the wordlist /usr/share/dirbuster/wordlists/directory-list-lowercase-2.3-small.txt. This list is over 20 times larger than the last one. I might be beating a dead horse here but hopefully something interesting will pop up.

Okay so I am back after a while and I have a new idea. I am trying to enumerate the home directory, but what about the directory that we had found earlier. Let’s try to use the command gobuster dir -u http://$IP/admin-dir/ -w /usr/share/dirb/wordlists/common.txt -x .php,.txt,.html. We found something new! It looks like there is something at the domain http://$IP/admin-dir/contacts.txt. It even gives us a 200 response code so we should be able to view its contents. Look’s like it has the names and email addresses of designers and developers of the admirer app. This might help us brute force an ssh login. Let’s try using hydra on a set of usernames that include the names we found in the file. Here is the command I used hydra -L usernames.txt -P /usr/share/wordlists/rockyou.txt $IP ssh.

While waiting for hydra to run I also tried an anonymous ftp login but I just got permission denied. Also if we don’t find any ssh credentials we could always try hydra on ftp. Wait a second… haha I am such a fool. I bet the ssh and ftp passwords are the same. So if I can’t brute force ssh the I probably will not be able to use hydra on ftp. While waiting for hydra and another gobuster scan to be completed, I stumbled upon the HTB fourms and read a few posts about this box. There was a hint about this box’s name being similar to that of a database, so I did a quick google search and found this link. There is a database called adminer. That is pretty similar to the name of our box. Let’s read up some more about this database and maybe do some manual enumeration.

After trying a few different paths from adminer's GitHub page I didn’t find much.

This is a list of the ones I tried. I also started a nikto scan using the command nikto -host http://$IP. My nikto scan didn’t show much, a little disappointing. However, we got a new file from another gobuster scan. I used the command gobuster dir -u http://$IP/admin-dir/ -w /usr/share/dirbuster/wordlists/directory-list-lowercase-2.3-medium.txt -x .php,.txt,.html. It took quite a while, but I found the file /admin-dir/credentials.txt. It looks like it has some WP credentials, ftp credentials and some email credentials. Let’s see what the ftp login gets us.

After trying to log in we are successful, awesome! There is a database dump and some compressed file, let’s exfiltrate both of them so we can take a look around. We were stuck in the home directory of the ftpuser, so this is all we could get.

In the html.tar.gz folder we got all the contents on the website. You can find the ungziped version in the directory html. I found some interesting file in the directory utility-scripts. There are some .php files having to do with administrator privileges, so let’s investigate those in the web browser and see if we can access them.

Something I found in the utility-scripts/info.php file that I think is funny is that it says Adminer version 4.9 is running, but on the Adminer GitHub page the latest version is 4.7. We can also access the page utility-scripts/admin_tasks.php on the website. This might be a lead! From this page we can see that there is a user named waldo logged into the machine. This person also appeared on the credentials page exfiltrated from the ftp server. Let’s see if we can ssh into the machine on the user waldo with any of the credentials we found. Ouch and after trying the server with all the passwords we have found so far we are not lucky. I guess it is time to look at dump.sql.

Well another disappointing lead, it looks like the dump.sql file just contains the descriptors for the images on the server. Boo hoo.

What’s strange is that of all the files that we exfiltrated from the utility-scripts directory the only file that does not exist is db_admin.php. I don’t know the significance, but it is something to note.

Okay so I finally found something interesting. I used ffuf -u http://$IP/utility_scripts/FUZZ -w /usr/share/dirb/wordlists/big.txt -e .php,.txt,.html. This popped up that there is a file called adminer.php. This gives us a login page. I am not sure what the DB stuff means, but we can try and use the credentials we have found in hopes that we can use something. I tried using the credentials waldo::Wh3r3_1s_w4ld0? but didn’t have any luck. However at the top of the page there is a version number: 4.6.2. This is not the most recent version so let’s look up some exploits. Turns out that this version of adminer has a big file disclosure vulnerability. You can read about it here and here.

I have been having a lot of trouble starting my mysql server on my machine. I wasn’t able to connect for a while. However here is what I figured out.

Now that we have user and it’s privileges set we need to set the bind-address to 0.0.0.0 in /etc/mysql/mariadb.conf.d/50-server.cnf.

Now that this is all set we can connect to our server on the login page by filling out the following information.

Then boom we connect. We have come a long way to get this far! So close to user I can feel it. Now we need to try and exfiltrate the user’s password. Let’s investigate. We can enter SQL commands into this website. So based on the command suggested in the second article, we should be able to use LOAD DATA LOCAL INFILE '/etc/shadow' INTO TABLE test, looks like we are not allowed to view that file… surprise. Let’s try using the query LOAD DATA LOCAL INFILE '../index.php' INTO TABLE test because that is where we found some credentials from the files we got via ftp. This is what we found:

If we try using these credentials to ssh into the machine they work! User success. Here is the hash that was on my machine f0c71b0bad8032c9cf59393f1eb7d3e5.

Now to try and escalate to root! Right off the bat I ran the command sudo -l to see what commands waldo could run. We can see that there is a script called admin_tasks.sh if we try and run it we get the same options that were on the web interface. I tried to create a password backup but was unable due to insufficient permissions.

There is also a few backup that have been created. If we do the command find \ | grep .bak | grep .bak the we can find another password backup that has been created. Unfortunately we are not allowed to access this file again. I tried catting out the .bash_history of the users, but it looks like they are all being piped to /dev/null.

Now I downloaded the post exploit script linenum to the server and ran it to see if anything will stand out. I got lenenum from the repo here. Okay… so I don’t really know what I am reading, but nothing really stands out to me. However after doing sudo -l again I realized that I could run the admin_tasks.sh as root. So I can create the passwd.bak file. However I still cannot read it. Let’s see if we can alter the code in the shell script. I am silly. My target is not passwd.bak because I can already read it at /etc/passwd.

Right now my idea is to some how abuse the fact that when we do sudo -l that we have something to do with SETENV. I am thinking that we can preserve the EUID that the shell script is executed as. Because we know that we can execute admin_tasks.sh as root. So there has got to be a way that we can maintain the EUID from this process, essentially making us the root user. There is also a call to the file backup.py in our shell script that we have permission to run. Maybe this could be an attack vector as well, because technically the backup.py gets run as root as well. Let’s do some research. I found this article. It has to do with being able too write to the file that the python module is importing. Let’s see if we can locate this shutil.py file. Well it looks like we do not have permission to edit the shutil.py file. But what if we can create our own and make the python file being ran to look there. Let’s try this in waldo's home directory. I would say do it in /tmp, but the machine deletes /tmp frequently so it would be a pain to work in. Okay so let’s create a file called shutil.py. In there we need the same method signature that is in the real shutil.py file for the make_archive method. In this method we don’t need any of the arguments, we just need the method to be called. So I want to spawn a reverse shell. Here is what I have.

Now from here I thought we could just run the script from this directory, but that is not the case. Turns out that this file needs to be in the python sys.path I tried adding it to the sys.path using some choppy code, but it did not work. Then I read about setting the environmental variable PYTHONPATH to so I set it to /home/waldo. That didn’t work either. But after a hint, it turns out that what we need to do is run it all together as SUDO. First set up your listener on your local machine. Here we run the command nc -lvnp 1234, then on the server we need to run the following command: sudo PYTHONPATH=/home/waldo /opt/scripts/admin_tasks.sh then select 6. If you set up your listener on your local machine then it should work. Type whoami on the reverse shell and you are root! Congratulations. Now to cat out the /root/root.txt file. Overall this was a very difficult box for me. I probably worked on it for 8+ hours, but I feel like I learned a lot. Onto the next box!