Containers and virtual machines are used all across cloud infrastructure. Cloud providers utilizes virtualization to divvy up hardware resources so that they can maximize hardware utilization on their machines. Docker is used to develop, deploy, and ship applicaiations quickly with low overhead some isolation. Both of these technologies are vital in how we interact with the web today. We are going to dive into Docker and how containers and virtual machines are different. This type of exploration allows us to be more aware of potential security issues and be able to talk about what kind of infrastructure a modern web service may be running.

What is Docker not? #

Docker is not a virtual machine. Virtual machines allow one set of hardware to run multiple operating systems by carving out resources to dedicate to each OS running. Hypervisors such as VMWare manage these virtual machines and divvy up resources. The hypervisor can run in place of the traditional operating system such that it is the only software interacting directly with the hardware (Type 1). In most cases, virtualization allows for complete isolation of environments so that OSs running on the same hardware cannot access each other’s memory spaces at all. At a high level, this is implemented by not allowing the OS running to know that more resources are available. 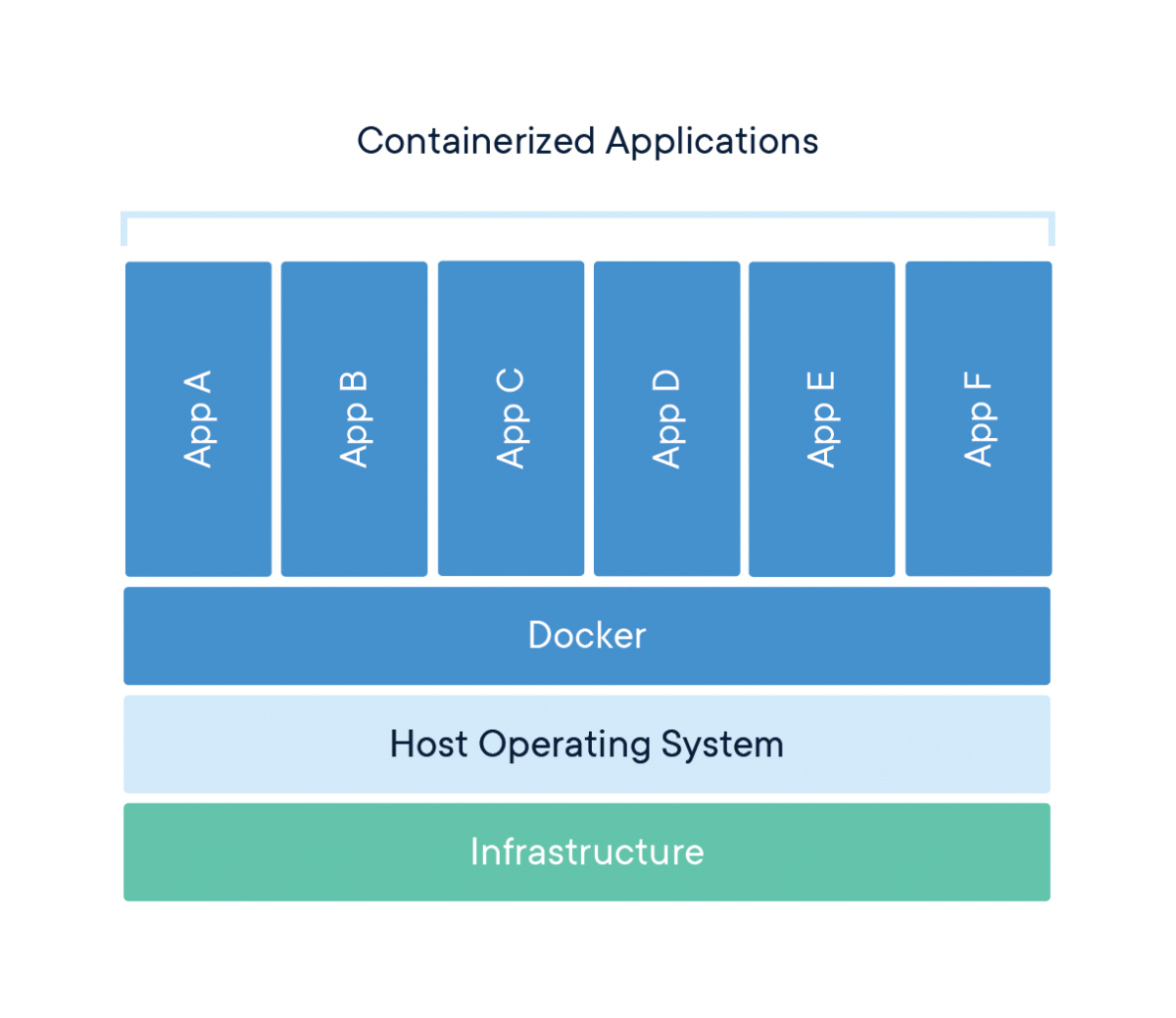 These containers run on top of the docker daemon, running on a host OS (ex. Ubuntu). Each container has it’s own file system, processes, and system memory. A Docker container cannot access the processes running on the host OS, and it cannot access the processes running on parallel Docker containers. Containers are self-contained; everything needed to run the application inside the container is installed, except for the kernel. If you install a website, then the backend and all the required applications will be installed. Once we create a Docker container, we can pack it up and take it anywhere. It is possible to deploy it on any system that is running Docker and shares the same kernel.

Docker is fast and lightweight. Each docker container is sharing the Linux kernel on the host OS, so when an application launches, the kernel does not need to start; it is already running! Docker can also help with developing microservices. You don’t need to keep developing apps repeatedly but can package and ship smaller parts of a big project. Docker also contains all its dependencies within the container. This can reduce conflicting dependencies on a machine and also makes these dependencies easy to install since they come shipped with the container. Docker containers can quickly recover from a crash and won’t affect other processes on the system. In addition, there is the added benefit of security through obscurity. Since a container cannot see processes outside of its namespace, the containers are secure, at least to some extent. We will talk more about the security of containers down the road.

For example, someone wants to set up websites. They can split the store application into account services, product catalog, cart server, and an order server. With Docker, we can set up containers to perform these functions then deploy them on the different servers with our websites. If we have a store and a forum website, these both need account services. To get account services running on our forum, we need to deploy our docker container that deals with account services on our servers then we have account services set up for our websites. Another use for Docker might be to keep track of a toolset. Penetration testers often have a set of tools they prefer to use. When starting up a new system or new VM, it can be a pain to install all of these tools; with Docker, it is possible to create a container with all the tools you need at the version number you want.

How is Docker Implemented? #

Docker is built on the power of cgroups. cgroups allow the Docker Manager to allocate specific amounts of memory, network bandwidth, CPU cycles, and more to specific processes running on the system.

As we can see, there are namespaces to handle most of the tasks that the OS does. Containerization is like virtualizing the OS, not the hardware. By creating these namespaces, Docker is essentially creating a virtual OS for the application to run in. However, unlike hardware virtualization, the host OS can see the processes running inside of the container. This is because the container is sharing the host kernel. Although the host OS and the Docker container share different namespaces, the Docker processes are still running inside the host OS namespace. Namespaces put the blinds on the container. The container believes that they are the only thing that exists but does not know what lies beyond itself.

You can either do this on your local machine or, like I am, in an EC2 instance. An EC2 instance is a VM hosted on AWS, and the micro-instances can be spun-up with the free membership at no cost. It also gives me a clean platform to learn about Docker in. This tutorial is for a Unix based machine. Pulling the CentOS image on a Windows machine might not work unless you are inside the Windows Subsystem for Linux.

The host OS I will be using is Ubuntu; the installation commands may be different if you are on another distro.

How to Install Docker #

The docker group grants privileges equivalent to the root user. For details on how this impacts security in your system, see Docker Daemon Attack Surface.

The Docker CLI uses the command docker to interact with the docker daemon. We can pull images, run containers, execute commands inside containers, and more with this command.

First, let’s install an operating system using Docker. We will install the CentOS image to see how namespaces work within the context of a container. We can use the command docker pull to pull down images published on Docker Hub

The -it command allows us to have an interactive terminal. Now we are inside the container! We can observe how the pid namespace changes if we use the command watch "ps aux" in our container then search for the process on our host machine.

Another way to visualize the graphic above on our machine is to use the command pstree -p. pstree allows us to see all the processes running as a tree; we can see where processes forked and who their children are. With watch still running in the container, let’s execute this command. 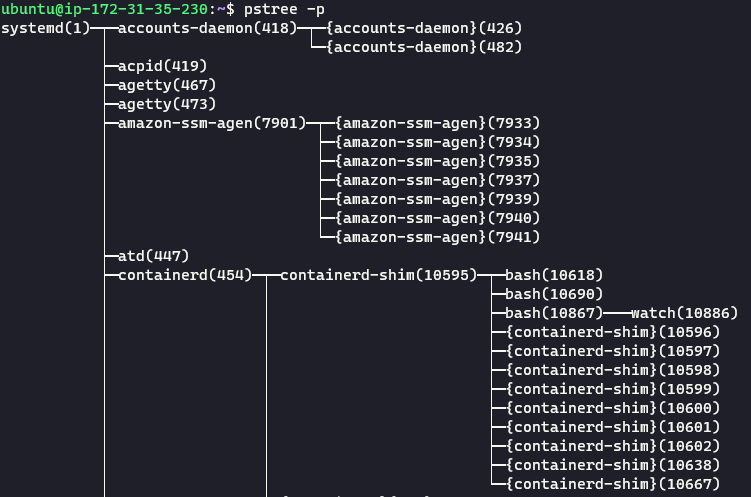 Let’s take a look at the output. We can see that watch forked from bash from the containerd-shim, which started from containerd, which was created by systemd. containerd is automatically started by the Docker daemon and “manages the complete container lifecycle of its host system.” You can learn more about containerd on its website and more about how Docker uses it in the Docker Documentation.

We can check the namespaces of our machine’s processes by looking in the proc folder in the root directory.

The output shows us the different namespaces used by this process. If we compare this to the namespace of the shell process running on the machine, we will see a different set of namespaces. 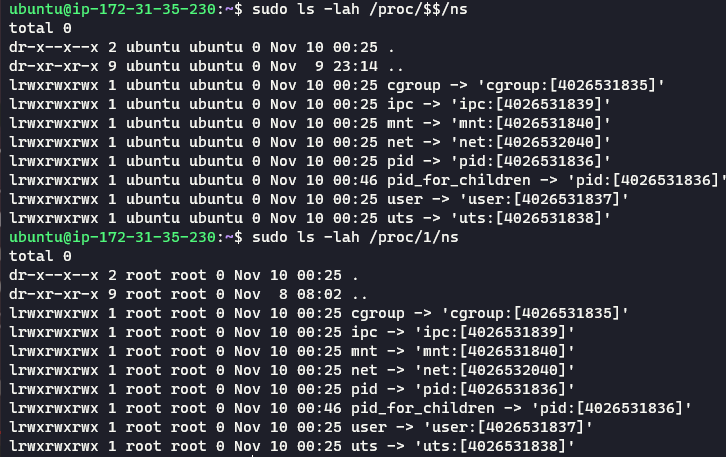 Docker makes it very easy to deploy web applications. On my EC2 instance, I will deploy a vulnerable web application with a backend and front end in seconds. The image I am going to use is called OWASP Juice Shop.

If you don’t know what OWASP is, it is a nonprofit foundation that provides free and open-source security tools to the world. The Open Web Application Security Project (OWASP) also has hundreds of local chapters worldwide where members can network and learn about security.

To get the container image, we are going to use the docker pull command again.

From my AWS instance, I am going to run the container and map it to port 80. If you deploy this container on an AWS instance, make sure that you have a rule that allows inbound traffic on port 80. Traffic rules are in the security settings of your instance.

If you want to run the website on your local machine, the command differs just a bit.

Now navigate to the public URL of your AWS instance. If you are doing this on your local machine, visit localhost:3000. If it all worked correctly, you should be greeted by the Juice Shop page. 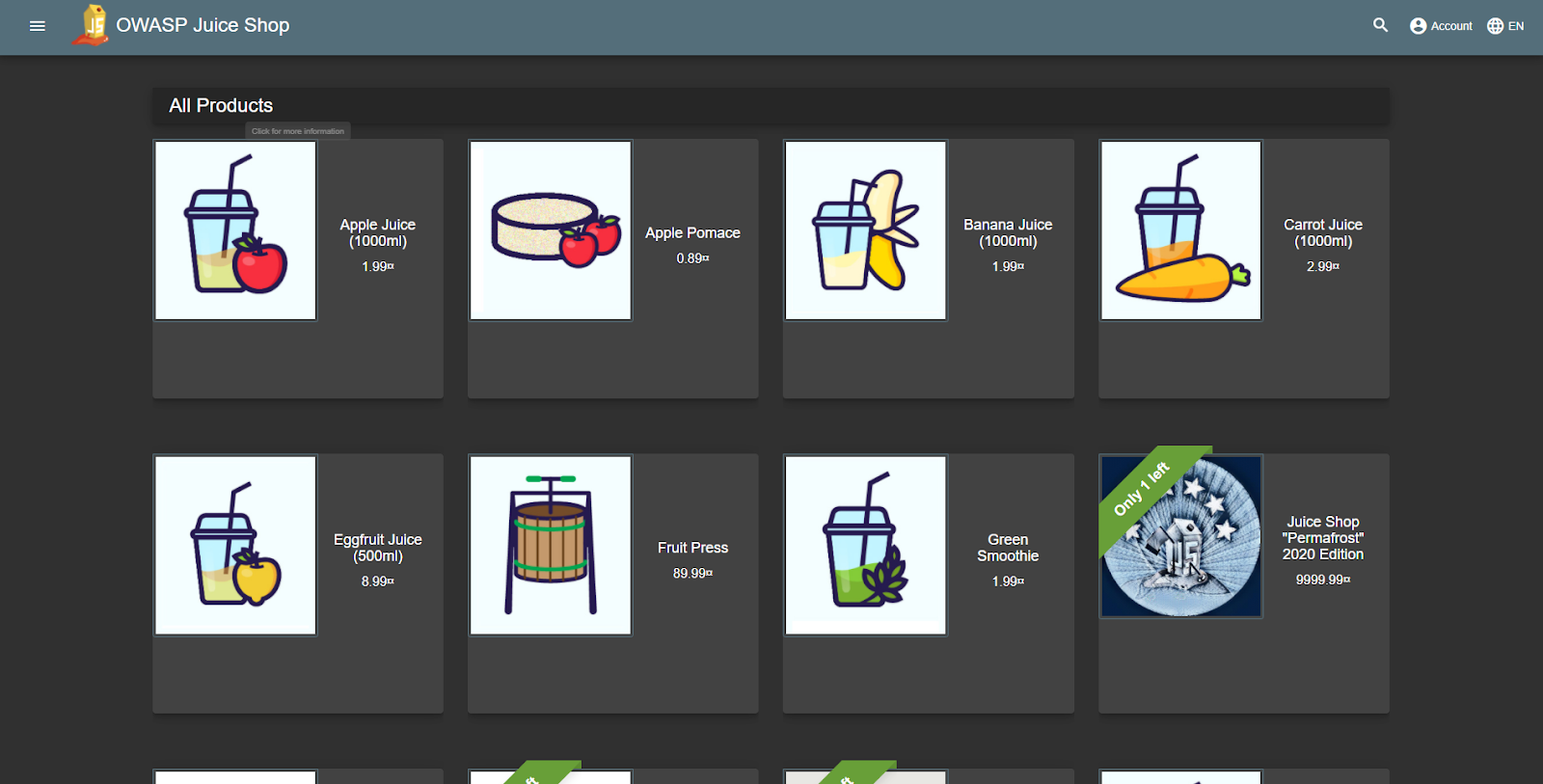 Virtualization and containerization are almost omnipresent technologies in web service infrastructure. When you rent a machine on AWS, Azure, GPC, or any other cloud platform provider, you are not renting the whole server and all the hardware on it; you are typically renting some of the hardware, accessible by a virtual machine. When spinning up one of these VMs on a cloud platform, you can choose whether you want Linux, Windows, Solaris, BSD, or other kinds of operating systems. This is important because these service providers want each of their users to have a completely isolated environment all to themselves, even though there might be ten other people using the same hardware. 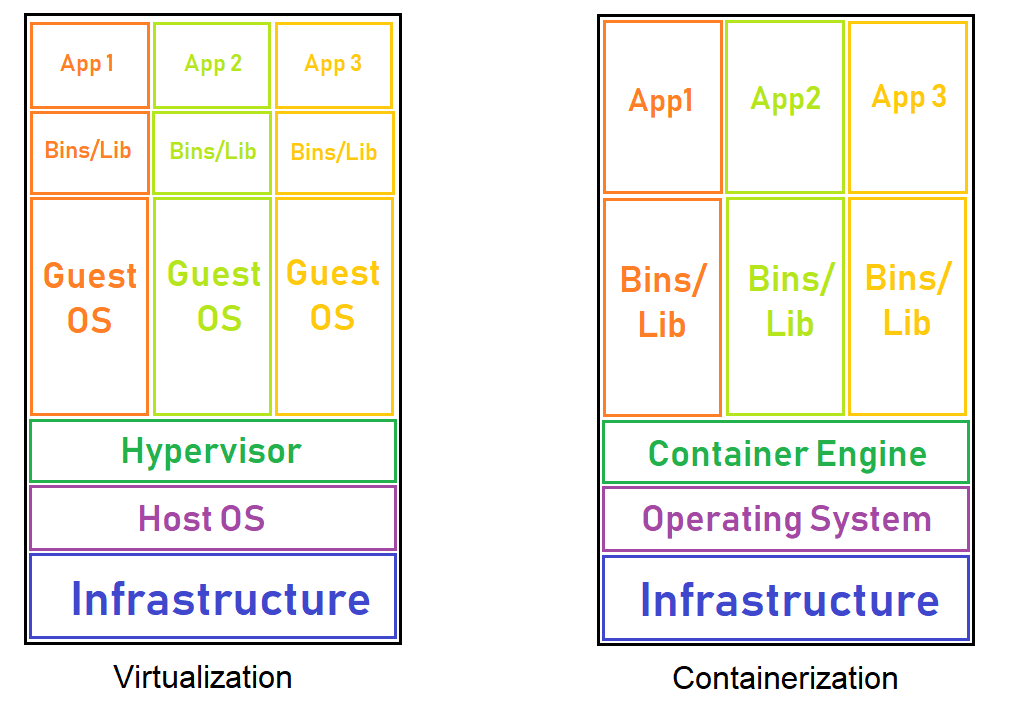 Containerization comes in handy when we want to deploy applications on our server. The container engine (Docker) can handle a large number of containers with ease. We could isolate different applications on our machine using virtual machines and have each application run on its operating system, but this is a very heavy process. If we choose to virtualize everything, we need to spin up different kernels, and accessing hardware is not as efficient. When using containers, we share the kernel with the host OS, and accessing hardware is quicker because we do not need to go through the guest OS, then the hypervisor, a container can jump straight from the host OS to the hardware. This reduces overhead and, in addition to sharing the kernel, makes containers a much lighter weight and faster way to isolate applications.

If an application crashes or fails inside of a container, the container can just be rebooted. Restarting a container is much less costly and much quicker than rebooting a VM because the kernel does not need to be reinitialized.

However, containerization does not come at a cost. Because of the shared kernel space, containerized applications can only run on the kernels they were built on. That being said, a container built on Windows probably might have issues running on Ubuntu. This also means that containers are vulnerable to kernel-level exploits. Once a container is broken out of the attacker has free reign on the host OS. Including all the other containers running on that system.

The security of a container highly depends on the security configuration of the host machine. For example, make sure the Docker daemon can only be controlled by trusted users and not any user on the machine. The Docker documentation also recommends that any server running Docker containers should exclusively run applications in containers, except for admin tools like SSH and logging tools.

I used a lot of resources to compose this post. Including the resources listed below, I am incredibly thankful for LiveOverflow. His video about Docker proved to be priceless resources when learning about the implementation, and the hands-on part of this post is based directly on his video about namespaces. Another invaluable resource was the NetworkChuck. His video highlighting the differences between virtualization and containerization helped me grasp many of the nuances between the two.

I ended up reading a lot of Docker documentation to come up with this, and it makes me remember how great good documentation of a tool is. It is great to see that the documents mentioned the underlying technologies, and it offered a wealth of information about where to look next.

If you are interested you can checkout the slides I prepared for this presentation here.